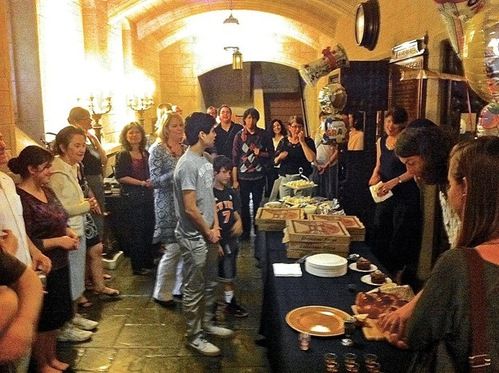 1. We are an unaffiliated Conservative Synagogue of “Two-Testament Judaism.” (See Left-menu “Why ‘Conservative?'” for more information on our stream.) We use the term, “Two-Testament” more often than “Messianic” because “Messianic” can have extremist or apocalyptic connotations we wish to avoid, since they do not apply to nor define us in any way. "Conservative" (stream) and "Two-Testament" (our distinctive) make our place on the landscape clear without unnecessary encumbrance.

2. We have a primary geographical focus: New York City – Manhattan – the capital of the Jewish world outside Israel. We welcome visitors and Members from anywhere, and we have a particularly vibrant connection to Jerusalem, Israel – in which our long-term plans involve planting of an Israeli sister-congregation “Congregation Beth El of Jerusalem.”

3. We embrace faith in the One God as described in the Jewish Scriptures, according to those historically Jewish traditions affirmed as scripturally and spiritually valid through sound spiritual and scholastic processes. (See Isaiah 8:20)

4. We affirm as true and valid the two distinct portraits of” Messiah” within Jewish sacred writ: (i) the Suffering Redeemer-Messiah Scripture describes in detail (Isaiah 53), and whom Talmudic tradition affirms as “Messiah Son of Joseph that will be killed” (TB Sukkah 52a); (ii) as well as the Conquering and Peace-bringing Messiah whom the Sages call “Messiah Son of David” (TB Sukkah 52a). See the Menu topic, “Who Is Yeshua?” for recorded teachings on the Suffering Messiah – or – the position paper, “The Suffering Messiah in Jewish Sacred Writ” for more written information.

5. We believe the Suffering Redeemer had to be the historical person Yeshua of Nazareth, whom non-Jewish faiths call by his name in Greek-translation – ‘Jesus.’ This is the primary distinctive of the terms “Two Testament” or  “Messianic. We believe Messiah (as Suffering Redeemer) has already come. Messiah had to arrive during the era of the 2nd Temple in Jerusalem, as the prophetic writings clearly foretold. (Daniel 9:24ff + TB Sanhedrin 98b). We also believe in accord with Scripture and with countless Jewish generations that Messiah is a more than merely human personage: He was and is “the Son of God” (Psalm 2, Proverbs 30, TB Sukkah 52a, DSS 4Q246, 4Q251 et al), and in a way never effectively reduced to a brief epithet, also somehow a visitation of The Creator to humankind (Zech. 12:10).

6. We affirm that belief in the Messiah Yeshua of Nazareth is endemically Jewish faith. Neither Yeshua, nor any of those who followed Him in Scripture ever envisioned, advocated, or condoned faith in his Messiahship as justification for departure from the faith and customs of Israel (Matt. 5:17-19, Acts 21:18-24). Hence, we practice our faith in the context of the historic Jewish tradition, including traditional life-cycle events such as b’rit milah, b’nai mitzvah ceremonies, Jewish marriage rites, etc. Our worship is organized per New Testament instruction in Acts 16 & 21 – "not abandoning the customs of our ancestors.” We see ourselves as full members of the multi-millennial Jewish conversation, and when we bring takkanot (revisions of practice or theory) to the table, we do so with great respect for the cultural and national context Scripture enjoins upon us as Messiah-believing Jewry.

7. We acknowledge the truth that the One God loves more than one nation, and that His redemptive plans for humankind have always included other nations in a manner totally respecting the uniqueness of each. (Isaiah 49:6, Ephesians 3:14-15) These nations are not under a requirement to ‘convert’ to Jewish identity to experience God’s redemption through His Messiah, just as Jewish people are not required to abandon Jewish identity to live rightly with and before Him. (Acts 21:25) God‘s agenda is not the homogenizing of our species. The fact millions of non-Jews refer to the Messiah with non-Jewish names does not alter his Jewish context: calling him “Jesus” does not make Him a Greek, just as calling him “Issa” (Arabic) does not make him an Arab.


8. We affirm Scriptures declare there will be people born outside the Jewish nation who experience differing degrees of ‘calling’ to participate with the Jewish nation’s destiny – and we seek to embrace each of those manifold and distinct kinds of calling in a manner appropriate to its individual nature.
8. We affirm that both Testaments of Jewish Scripture require active commitment to spread understanding of the One God‘s existence, His love for Humankind, and His offer of redemption from the temporal and eternal devastations wrought in human lives by the powers of deception and of sin (Psalm 96:3-5).

"Visit because you're intrigued. Stay because you're home."
If this brief summary seems to describe you – you may want to consider making Beth El of Manhattan a regular visit in your schedule, or after a "getting to know you" season – perhaps even become a Member.  We are here for as many people in Manhattan – or at a distance who wish to become "Virtual Members" via the Internet ... as find this Community is for them spiritually, "home at last." Shalom!