Neutralizing One Poison Pill At A Time

April 18th, 2019
by Bruce Cohen
265 420 420 420
Misuse Of The Term, “Greater Israel” In The Press
We can now add the phrase “Greater Israel” to terms like “phobe” and “racist” and “colonialist” being misused in public relations to create sentiments not grounded in fact. 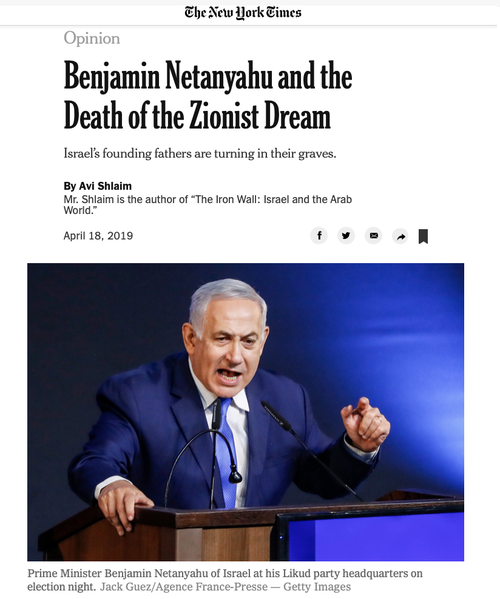 (See full NYT article at https://nyti.ms/2VNvL16 )
Professor Avi Shlaim’s article in The New York Times, “Benjamin Netanyahu and The Death Of The Zionist Dream” is a telling example of the new rhetoric taking over the American marketplace of ideas: state inaccurate or unfounded ideas as if they true, so the masses – not known for complete vetting of ideas – will swing their support to your side. It was the favorite tool of Hitler and Goebbels: “the big lie.” Just tell it until people hear it so much, they just assume it is true.

Shalim uses the term, “greater Israel” in the same manner Arab expansionists use it: to evoke the Nazi term, “Greater Germany” used by Adolf Hitler along with his “Lebensraum” (space to live) as justifications for taking over Austria, Czechoslovakia’a “Sudetenland” (southern region), Poland, and Alsace-Lorraine.

“Greater Israel” is not remotely what Netanyahu is after.
The term, “greater Israel” refers to the borders described in Israel’s biblical land grant, which extend “from The River to the Sea” – but in that portrait, “the River” refers to the Euphrates River. (See these plates from my ©1991 book, “Israel, Arabs & The Middle East.”) 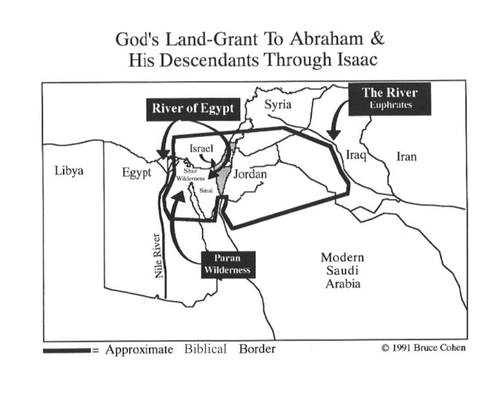 This is the “Greater Israel” to which the arch-Orthodox in Israel aspire.
This is the agenda of the most extreme of Jewish religionists.

Netanyahu has no interest in this agenda.

In passing laws like the recent “Nation State Law” declaring that Israel is a Jewish State, with Hebrew as the official national language, and as the Jewish national anthem, Naftali Imber’s Hatikvah (The Hope) in Hebrew – Netanyahu’s government is merely winning a battle for a strategic objective of Arab expansionism: to take over Israel by out-reproducing Jews.
The hegemonist Arabists will have none of this Jewish survival activity.

The recently passed Israeli Nation State Law enraged them because that law cuts off their already underway attempt to conquer Israel by out-reproducing Jews to take over the demographic majority, and thus, the democratic government. An equivalent agenda would be if fundamentalist Muslims bent on installing Islamic Law in the United States, got themselves elected with the specific intent of installing Islam – a tyrannical, non-democratic system – in place of American Constitutional Democracy. If America passed a “Nation State” law clarifying that when someone takes an Oath of Office affirming they do so “with no mental reservation, purpose of evasion, or other agenda contrary to the Constitution of The United States,”  that they are affirming they are not an agent of any religious agenda contrary to the Constitution (such as turning free America into an Islamic tyranny without those very freedoms).

The Arabs in Israel and the interests siding with them are misusing the term by applying it to Israel’s current agenda to (a) retain the lands granted to them by International Agreement in 1947’s UN Resolution 181; and retain control of all lands formerly held by hostile powers having repeatedly used them to stage attacks on Israel – at least until such time as, in Egypt’s case, Israel receives such conclusive proof of an Arab state’s decision to become non-hostile, that Israel feels unthreatened by returning “land for peace” that Arab country formerly held.
The currently emphasized Golan Heights are a great example for consideration.

The Golan is “high ground” literally overlooking from high eastern elevation northern Israel’s entire Jezreel Valley and Galilee, and giving modern weapons “line of sight” access to all of northern Israel from an elevated observation post and launching pad. Think about the rockets formerly raining down on Israeli farms in Galilee – acts of repeated demonstrated intent to slaughter Jewish civilians and drive Israel out of the lands the UN granted them by making normal life there impossible – just as Hitler declared he aimed to “remove normal life from London” by his V2 rocket bombings of that city.

The actual “Greater Israel” agenda would include Israel aiming to take over Damascus, and turn it into a Jewish city the way ancient King Esarhaddon turned the Ephraimite region of Samaria in central Israel into so Assyrian an area that Jews in the south of Israel as far back as the New Testament “had no dealings with Samaritans” because they were not considered actual Israelites.

Netanyahu’s Israel has no “Greater Israel” agenda.
The “Palestinian” side is name-calling with ”Greater Israel” as an accusation of a colonialist, expansionist, conquest agenda. It is the same old song of white men stealing an oppressed of-color population’s land. They say Israel is the new South Africa, and Israel’s claim to her present legitimate lands through legal JNF purchases in the last two centuries, and the grant from the United Nations, and some of the Israeli acquisitions from defensive warfare which the Arab hostile attackers who keep losing, all these are colonialist conquests and “occupations” governed by “apartheid.”

After every war of aggression they lose – the Arabs want what the lost back – so they can recoup, and try again.

Here is the rub.

The Arab hostiles having lost 5 wars of aggression the last 70 years must now learn to live with the consequences of repetitive international criminal misconduct, and attempts at Jewish genocide: they will never, ever get everything they want.

Israel got back unified Jerusalem in 1967’s Six Day War.

Israel will never give back Jerusalem.
The recidivist hostiles are going to have to find a way to live with this.

So far, they cannot. Especially the Quran-driven Islamic wahabis, who feel religiously obligated to obtain for Arabs what their motto states: “From the River (Jordan) to the (Mediterranean) Sea, all of Palestine (a non-existent state with a Roman name that has, in fact, never existed) will be free.”

The “free” part is chilling. It is an Arabist application of a Nazi Aryan Supremecist motto: “Ganz Europa, Judenrein!” “All of Europe, Purified of Jews!”

And both wanted and still want for their cadre and ideology – eventually – the entire world.

They will never get what they want.

UN-sanctioned Israel is here to stay.

Netanyahu’s deeds like the Nation-State Law were undertaken to cut off one avenue through which the Arabs are trying to take over Israel: by out-reproducing Israel so they become a demographic majority inside the borders of the Jewish state.

When Israel “wins” again, cutting off yet another Arab hostile ploy, the Arab side becomes more angry, more whiny, and more deceptive in their rhetoric.

Thus, the “Greater Israel” term, inhaled by voices like Avi Shlaim, is exhaled like an airborne virus onto the public consciousness, creating diseased views of reality.

Israel does not want “Greater Israel.”
Israel wants to live.

Israel will not cooperate with any attempt in any avenue aimed at her destruction.

That is not a “greater” anything agenda.

That is a mere agenda of survival – a right of which the Arabs have been seeking to deprive the Jewish world for the past century, an agenda for which their leader Has Al-Amin Husseini, the , Grand Mufti of Jerusalem in the 1940s, found Adolf Hitler a kindred spirit.

Kindred spirits for erasure of Jewish anything are not hard to find.

That is the pity of the current increase of antisemitic everything.

It is high time the Arab world came to peace at least with one idea.
Israel will never allow herself to be overrun, or set up to be overrun.

In neither the tactical (short term) nor strategic (long range) spheres, will Israel ever allow herself to be moved to cooperate with her own destruction.

No peace can arrive, until that idea is genuinely accepted in every echelon of Arab leadership in the Middle East, Islamic hegemonist groups, and any “replacement theology” driven group using religion – or any justification – for erasing the Jewish State from the map of the world, and the Jewish People from presence in the world, itself.

Far from “the death of the Zionist dream,” Netanyahu is actually preventing the death of the Zionist State. For everyone who wants to see Zionist related to history textbooks as an idea destroyed by Arabist manipulation of the world’s apparently endless well of antisemitic appetite for Jewish death – the bad news is – the five wars you have lost in the last seventy years are only the beginning of what you will lose if you continue to hate Jews in your heart, and seek or enact their harm with your words and deeds.

Can Halloween Be Kosher?
Be Sure To Revisit Our Rabbi’s Blog on Shavuot’s Actual Biblical Meaning!
Why No “Lag BaOmer” at Beth El of Manhattan?