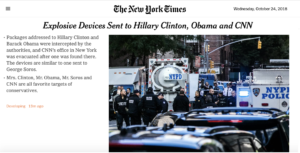 “They have sown the wind, so they will reap the whirlwind.” – Hosea 8:7

“What seed a person sows, that crop shall he also reap.” – Galatians 6:7

This might just be the most obvious blog I have ever written: a real “no brainer.”

I am willing to risk being fatuous to effort fomenting public safety.

Unless both sides of America’s main political camps can find a way to dial back from the apocalyptic level of rhetoric they are firing at each other, it seems the recent spate of bomb mailings will most likely be only a beginning.

We can dissent and be civil.

We do not have to demonize to disagree.

Assignment of criminality should always be accompanied by sufficient and suitable proofs for filing of official process. No one should be called a criminal – much less, a super-villian – unless the accuser is willing to provide necessary levels of proof and follow process through to conviction or acquittal.

If name-calling is taught as improper even in the school-yard and debate team, then it has no place in the halls of government; and public assault on people as agents of evil has natural repercussions; especially in people on any opposing side of the argument who may be possessed of lesser or impaired powers of reason and/or self-control.

And if people keep labelling their opponents with epithets like “another Hitler” or “the soon death of the Republic” and other such jibes in order to obtain or retain power ––– then they may find they are signing their own death warrants.

In a piercing irony, Hillary Clinton was targeted for one of these attempted murders by mail-bomb: and she said only weeks ago,

“We don’t need to be ‘civil’ with an enemy like the present Republicans, when our whole civilization is at stake! We can return to civility after we (the Democratic Party) have recovered power.” 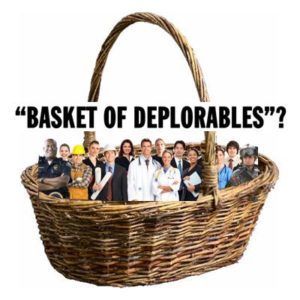 It is chilling to think of the implications of using apocalyptic levels of vilification on one’s opponents. Perhaps even more chilling is to look back on the 2016 election are see the outcome of Mrs. Clinton – certainly one of the bigger brains in current politics – call a huge swath of voting America “a basket of deplorables” – apparently unaware or having lost connection to the fact that no candidate has ever insulted people into voting for him or her.

Unless we all immediately return to the basics of civility we were all taught in school is the bedrock of honorable dissent– there may soon be many fewer leaders to lead their respective camps forward in the good fight for “a more perfect Union.” As Malcom X said so chillingly in 1963, “chickens always come home to roost.” He was reframing the words of Abraham Lincoln’s 2nd Inaugural, “it may be that every drop of blood drawn by the lash (of slavery) will be requited by one drawn from the sword (of our Civil War).”

It is time to prefer the teachings of Mr. Rogers over those of Mr. Machiavelli.

The end does not justify the means: and the cost of deliberately sustained, incendiary rhetoric war for votes will almost certainly lead to an inferno of yet undetermined breadth.

I was around in 1968, when America exploded into barely-contained violence. I have no desire to return to the era having seen – and lost – “Bobby, Martin, and John.” Qualified national and international leaders are too rare to lose for no good reason.

Can Halloween Be Kosher?
Be Sure To Revisit Our Rabbi’s Blog on Shavuot’s Actual Biblical Meaning!
Why No “Lag BaOmer” at Beth El of Manhattan?